These mushies are so addictive that I’ll eat them with my dinner as well as breakfast!

I have this ‘thing’ with turmeric: it’s so ridiculously good for you (anti-oxidant, anti-inflammatory, anti-ageing, anti-almost-every-disease-under-the-sun) that I’ve become quite motivated to find ways to get more of the stuff into me… without a huge deal of effort! In order to avoid cooking up a huge Indian curry every time I feel the ‘need’ for some, I started grating the bulb directly into and onto different foods. 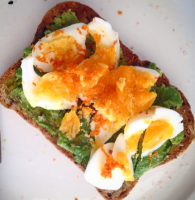 I find it quite enjoyable with egg, whether grated directly over poached or boiled, or added to a scramble or omelette mix. But one morning recently, whilst frying up some mushrooms to eat with some scramble, it dawned on me to try pairing them up with the turmeric instead. Since I usually always cook with coconut oil, and I tend to relate turmeric to Indian cuisine, I decided to try adding cumin as a balancing flavour.

Well, dang! I was blown away. Now maybe it’s just me, but the fact that I cooked and ate them twice in a space of 36 hours suggests that I was hooked!

It’s so simple it’s ridiculous. For a single serve you’ll need about a cup of roughly chopped button mushrooms, coconut oil, turmeric & cumin (fresh is best, but powdered will still do). Oh, and some (Celtic or Himalayan) salt to taste…

Whack a couple of tablespoons of the oil in a frypan over medium heat, then add about a teaspoon of each spice (more if you wish – especially the super-cool super-spice turmeric). Stir it up for a minute then throw in your mushies. Keep the coconut oil beside you, since they suck up the fat like there’s no tomorrow so you’ll more than likely need to add a bit more along the way. Cook for about 4-5 minutes, adding a good dash of Celtic or Himalayan salt to taste, and serve immediately, scraping as much of the flavour from the pan onto your plate as possible, too! Deeeelicious 😀