I don’t get sick often. But I’m pleased that, becoming so well-acquainted with my body, I can now pre-empt an immune system crash. You truly need to learn to listen to your body…

I worked 22 hours over the weekend and could sense a composite energy pattern at play: I was stimulated by the social nature of the work (customer service…as well as entertaining my fellow workmates!) as well as the coffee I’d knocked back earlier in the day but then exhaustion was also discernible in some little mishaps (read: brain fog) and the loss of self discipline (poor food choices!) the further the shifts progressed. The physical ‘dead-giveaway’ was how dry my lips were, despite drinking heaps of water….

So upon waking with a sore throat in the morning, I’ve swapped out my usual cup of black tea (dehydrating caffeine) with the old lemon-water trick. But mine is a little different… because I (pretty much) always have “nutrient density” on my mind. It’s by no means an original idea to add honey and ginger to a hot lemon & water drink, for their flavour (honey tames the lemon, ginger’s fire combats the stinging throat) and health properties, but I have found that a little turmeric (one of the flavour-of-the-month ‘superfoods’) goes well too.
It actually happened by mistake: I’d been given a turmeric root that was very pale in colour (not the usual vivid yellow) so I kind of mistook it for my ginger bulb (I store them both in a container in the freezer). Luckily I didn’t use too much, and the result was quite palatable. 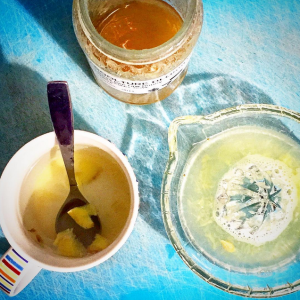 So what I do is pop the kettle on boil, ‘shave’ thin slivers of frozen ginger and turmeric (more ginger than turmeric, for taste) and pop them straight into my mug. Pouring the boiled water straight in, the root spices have a little time to steep, while I collect and add half a teaspoon of (raw) honey, stirring to dissolve. Then I’ll cut and juice half a lemon, and it’s ready to drink (at quite a palatable temperature too, thanks to the ‘cold’ lemon juice) immediately.

Oh, the relief! Thing is, it tastes so good I sometimes opt for a mug of the stuff when I’m not feeling off-colour, and that certainly cannot be a bad thing! 😉