One of the things that stuck with me from my very first Nutrition module in my Fitness training was learning that eggs have the highest Biological Value to humans… which basically means the protein in them is more ‘complete’ and better utilised by our bodies, compared to other sources like milk, meat and plant-foods. (I’ve since discovered that whey protein tops eggs but who really wants to consume a processed macro-nutrient? Naaaht me!)

This made me, as an egg-lover, happy. And since that day I have always maintained that if I were only allowed to live on ONE (animal-based) source of protein for the rest of my days, egg it would be.

Well, I just came across this little beauty on the site Science Alert, that lifts the value of the humble egg even further in my eyes: consuming them with raw veggies (that is… salad!) helps to increase valuable nutrient absorption…how GOOD is THAT?!

There’s one proviso though: it has to be the whole egg. The yolk is by far the most valuable part of this whole-food, so if you’re an egg-whites-only consumer, I’m sorry but you’ll dip out on the complete benefit. And, it almost goes without saying… choose organic where possible…

Take a look at the article: here-s-how-eggs-can-super-charge-your-salads 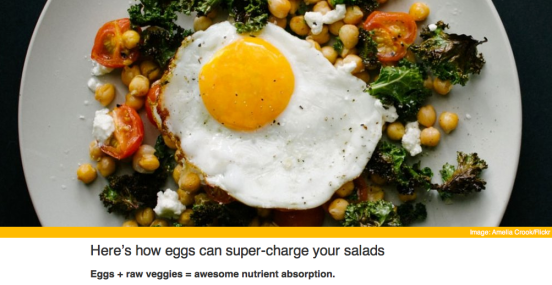 With Winter smacking us in the face this week, I felt the need for a nice thick, warming stew. But having had (what I considered to be) too much meat for some days prior, I wanted something plant-based… that would satisfy me.

Knowing how damned good legumes are for us (very high fibre and plant-based protein) and having a bag of mushrooms in the fridge that I knew needed to be used up, I began the search for a recipe but as usual, nothing I found comprised a vast array of veggies. So, true to form, I ended up adapting; fusing two different recipes together: one Thermomix Lentil & Veg Stew with a Mushroom & Lentil Bolognaise recipe on taste.com.au.

While I chose to make this using my Thermomix, it could be easily replicated by non-Thermie cooks because it’s a one-pot recipe. But a word of warning to Thermomix users: the quantities I used brought the bowl contents right up to the maximum (2 litres) so if you’re a little reticent, perhaps halve the quantities. It will still result in a decent amount of stew. 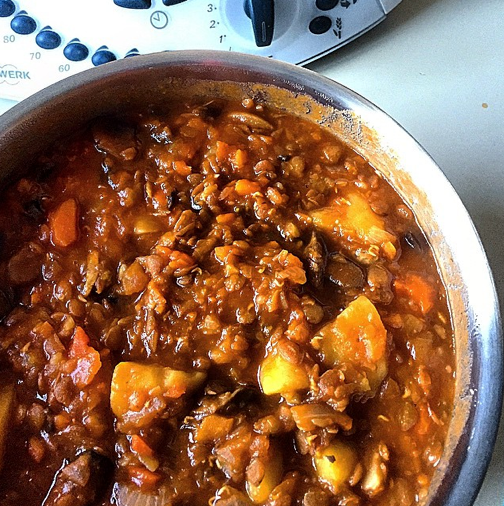 Thermomixers: Add the onion (quartered) garlic cloves, roughly chopped carrot and celery to the bowl and chop for 5 seconds @ Speed 5. Scrape down sides then cook for 3mins @ 100ºC on reverse Speed 1. Meanwhile, dice the potatoes and roughly chop the mushrooms. Scrape down the sides of the bowl, add the potatoes, mushrooms, lentils, stock paste, water, bay leaves and passata (or tomatoes). Stir gently before locking the lid in place and cooking for 45 minutes @ 100ºC on reverse Speed ‘Stir’, with the MC off and the basket (or a light dishcloth draped) over the top to catch splatters.

Stovetop Cooks: Finely chop the onion, garlic, carrot and celery, then warm the olive oil in a large saucepan over a medium heat. Add the veg and cook for 3-5 minutes (until onion has softened) stirring occasionally while you dice the potatoes & roughly chop the mushrooms. Add the potatoes, mushrooms, lentils, stock, bay leaves and passata (or tomatoes) to the saucepan and bring to a gentle boil before reducing to a simmer, partially covered for approximately 40 minutes.

Allow the stew to rest for at least 5 minutes (ThermoServers are the perfect receptacle) before serving so that the some fluid may be further absorbed by the lentils. It’s a perfect meal on its own, or with spiralised zucchini noodles, but you could add some pasta if you feel that you need “carbo-loading” 😉