I’ve had a couple of skin cancer ‘experiences’ in the past couple of years: in late 2015 I had a BCC (basal cell carcinoma) cut out of the tender skin under my left eye and a pre-cancerous one removed from the outer corner of my right eye at the same time. (Yes, I did very much resemble a street-fighter… see right!) And earlier this year I was directed by my dermatologist to undergo a course of topical cream (Efudex) to kill off another spot on my left cheek. (You can’t miss that red dot in the pic below! That was about halfway through the treatment.)

It was only when I went for my check-up last week that I was given some information that I considered so important that it warranted this post. It’s not particularly new science, but I hadn’t heard of it before and it really surprised me because it involves particular (natural, everyday) wholefoods that I eat regularly.

Simply, some foods have been shown to increase your sensitivity to the sun. And I mean, when you eat these foods in daylight hours it’s an open invitation to skin damage. The dermo’s nurse literally said to me, “it’s like holding a magnifying glass against yourself and saying to the sun ‘Here I am! You’re welcome!'”

So what are they and what makes them so ‘dangerous’? Well, there are surprisingly quite a few, the most widely consumed being celery, carrots, figs and citrus fruit. And it’s because they contain psoralens. 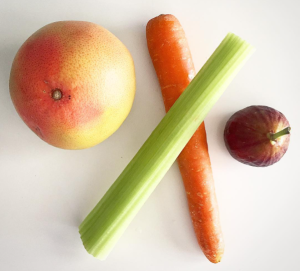 Psoralens are a naturally occurring compound and “when activated by sunlight or another source of ultraviolet light (they) may have phototoxic, mutagenic and photo-carcinogenic effects”. Hence the nurse’s magnifying glass analogy. For a fuller explanation (and a great list of the foods that contain them) see this article I found on the website healwithfood.org (it’s the source for the above quote).

It doesn’t mean you shouldn’t eat these foods, it just becomes a timing thing. My doctor said to simply avoid consuming them before 4pm. (I know right, that’s a bit specific!) The gist is, save them for dinnertime …or anytime after dusk. So if you eat grapefruit or usually enjoy an orange or veggie juice (including carrot & celery) as part of your morning/breakfast (or even lunch) routine it’d be best to change that habit. (Don’t be juicing anyway, ’cause you’re losing all that super-beneficial fibre!) Check out this article on Brown University’s website, for a study conducted specifically with citrus fruits.

Of course, changing your consumption habits for psoralen-containing foods in no way means you should disregard your normal sun protection practises. Think of it as an added safety measure.