Ok so how I came across this one was …kind of like the movie ‘Sliding Doors’. And I realise that won’t mean anything to those who haven’t seen it. But basically, it was by accident, and yet also a ridiculously close ‘shave’. Let me explain:

When I began making ‘raw cookies’ about a decade ago (before they became the energy/protein balls or raw truffles we all know today) I soaked dates. Yep, just that. I soaked dates, as the basis for these healthy raw food treats. You would blend them up (but because I never had a blender, I just chopped them over and over again until they resembled something a food processor or blender might spit out) then mix milled or chopped nuts, seeds and whatever else into them before the messy part of the job: the hand-rolling and coating in   desiccated coconut or again, nut meal.

It was when I came across a recipe that included cocoa (yes, before cacao powder went ‘mainstream’) that I realised soaked dates mixed with cocoa could make a kind of (weird) chocolate substitute. But this is where the train doors slid shut…. and I forgot about it.

…Until last year sometime, when, after making another slightly dry (I admit!) gluten free cake that I knew would benefit from some kind of moist topping (but what to make without heaps of processed sugar?) the train doors automatically opened and I soaked some dates. It worked perfectly – for ME: I realise chefs and food critics would turn up their noses, but I’m not about perfection (at the cost of health).. I’m about clean, unprocessed Imitation & Adaptation!

This is extremely easy but you’ll need to allow more time: the longer the dates soak, the better. In fact, if the dates are well soaked and chopped, you don’t even need a blender for this recipe; some old fashioned elbow grease (mixing by hand) will work. Oh and make sure there are no seeds in them!

One cup of dates (I use Iranian, I imagine Medjool would work even better, and may not need to soak for long – if at all. Please let me know how this goes if you try this!) will easily thickly coat a loaf-sized cake, with some to spare. 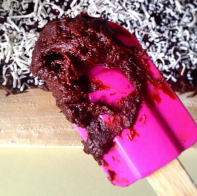 Drain the water from the dates (I actually keep this to use as a liquid sweetener in other creations: waste not, want not!) and throw them in a powerful blender with 2 heaped tablespoons of cacao powder (add more for a stronger dark chocolate flavour) and 2 tablespoons liquefied coconut oil. You will need to blend & scrape numerous times (Thermomixers, I performed about 4 rounds of 15 seconds, increasing from speed 5 to 9) but the result is worth it: a rich, thick, chocolatey ‘ganache’ that you can top cakes with, fill biccies with, or even eat on toast like Nutella (if you’re desperate enough)! If you really want to you could press the ganache through a strainer to ensure a smoother product, but for my money, what’s the point in removing all that extra natural fibre?

‘Ganache’ used as a biscuit filling

There’s heaps of room to experiment too: powdered spices or essences could alter the result… Vanilla or peppermint essence? Cinnamon? Even a touch of chilli powder? I think I might try to explore a salted caramel version so… stay tuned for that!