I just rushed in from a resistance training session, and had to rush out again in minutes, so how was I going to re-fuel? Since it’s winter here, I’m loathe to make a protein smoothie in my Thermomix because it’ll chill me from within.

The quickest, warmest, high protein, healthy fats replacement is a boiled egg on toast. I boiled the jug ala Jamie Oliver style, popped the egg and water in a small saucepan and let the stovetop catch up while I pulled out an avocado and the frozen (gluten free) bread slice ….when I saw it. The frozen Turmeric bulb. How would that go with egg? Turns out: ….brilliantly.

I smashed half an avocado on the toast, spread the egg over the top, then finely grated turmeric over all of that. With some Himalayan salt (I love salty eggs) & the slimmest drizzle of olive oil, it tasted DIVINE. And I just upped the nutrient density and anti-inflammatory properties of my post-training fuel, with minimal effort.

Some people can’t understand how I (or anyone) can eat our ‘national emblem’. The vegetarians’ and vegans’ opinions are justified but any other carnivore (or omnivore, for that matter) cannot complain about me eating ‘Skippy’ if they don’t think twice about eating ‘Daisy’, ‘Babe’ or Nemo!

Kangaroo meat is higher in protein than beef, naturally lower in fat as well, and provides the haem iron I choose to include in my diet. Added to the fact that it is considered ‘Game’ (wild caught) and therefore likely to be a much ‘cleaner’ source of animal protein to consume than the chemical-laden animals being farmed for bulk consumption.

From an anthropological perspective, humans evolved thanks to these kinds of meats: hunters (physically active people) originally had to chase down highly active creatures in order to eat. Daisy wasn’t docilely ‘grazing in the fields’ back then. It was suggested by one of my favourite fitness/nutrition/neuroscience gurus Paul Taylor that “you are the animal you eat”…

On with the story…

I picked up a kilo of kangaroo mince on sale and since I find the ‘mini-chore’ of divvying up individual portions kind of onerous, I decided to create something immediately to lighten my workload. I’m not usually a pasta fan, but somewhere along the line I’d bought some gluten free macaroni and since I’ve been trying to get rid of it (and cannot simply throw it out – wastage is a Sin!) for a while, “spag bol” came to mind.

Straight to the Thermie. Too. Easy. I literally walked in the door at 1:15pm and was eating by 2pm. 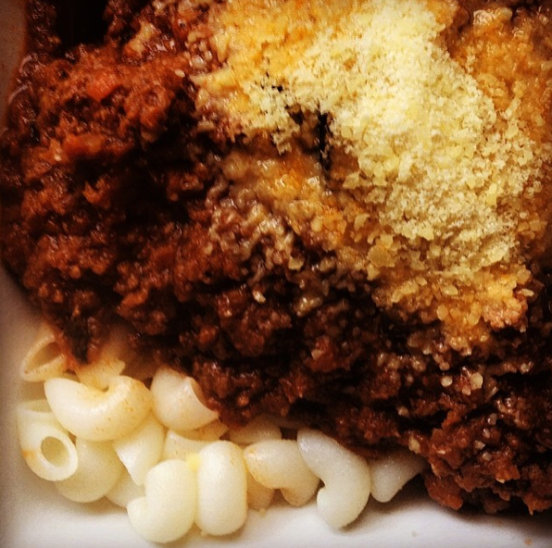 I threw 1 garlic clove, a roughly chopped brown onion, carrot & celery stem in the bowl and almost pulverised them (which ultimately resulted in a very smooth bolognese consistency) for 8 seconds on Speed 7. Then I threw in 20gm of olive oil, the 400gms of Skippy mince (instead of ‘Daisy’ & ‘Babe’) and various herbs (basil, nutmeg, parsley & a bay leaf) and set it on to cook for 10 minutes @ 100ºC, Reverse Speed 1.

In this time I apportioned the remaining kangaroo mince, put away the rest of the groceries and the already-used-ingredients, and pulled out the ones I had yet to use: red wine, tomato paste, tamari, the gluten free macaroni and parmesan cheese. And a zucchini, which I chopped up finely. (My usual bolognese recipe includes more vege – like capsicum & mushrooms – but I didn’t have my Thinking Cap on today. I was more interested in Time-Saving.)

While the bolognese simmers away in the Thermomix, the Magic Bullet pulverises the parmesan…

Since I’m not yet an expert at multi-skilling with my Thermomix alone, I prepared the pasta to cook on the stovetop, boiling the electric jug first (ala Jamie Oliver-style) not just to speed up the process but also to minimise electricity usage a tad. Once the GF macaroni was bubbling away, I pulled out my handy little Magic Bullet, threw a chunk of parmesan in and grated that up in seconds. Everything was ready. I had time to begin the clean-up!

The alarm for my pasta went off literally seconds after the Thermie signalled she was done. Perfect timing. A heavy-duty meal – enough to feed four – complete within 45 minutes… Brilliant!