As I’ve said before, salads are the quickest, easiest way to pack a wide variety of nutrients into one meal (see my ‘How To’ post, https://foodfervour.com/2015/12/01/the-quickest-easiest-nutrient-dense-meal/) and since it’s so humid today, I’m feeling lazier than usual. So salad for lunch it is. Cutting board, check. Knife, check. Bowl, check.

Craving some cheese, (I’ve started buying vintage cheddars because I love the sharp saltiness of aged ‘tasties’) I decided to run with a traditional popular combo, cheese ‘n’ tomato. And since avocado is so good for you, as well as complementing both of these foods, it had to feature prominently too.

So, starting with a handful of watercress (you could use any green leaf you like) half a lebanese cucumber, quarter of a red capsicum, half a large avocado and 6 baby roma (or cherry) tomatoes, I roughly chopped them all ….chewing on a stick of celery at the same time… before gently tossing them in the bowl. Slicing about 40gms of vintage cheddar from the block, I used the wide-grater (see the photo) to ‘shave’ the cheese then, adding it to the bowl with a drizzle of extra virgin olive oil (EVOO) and a dash of apple cider vinegar, I tossed the lot together with a little more gusto. A dash of ground black pepper and Himalayan salt and I was ready to dig in.

For something so simple, it’s a rich mix of flavour and texture: creamy, salty, moist and sweet all at once. But best of all, is it’s wonderfully filling thanks to the high fibre and healthy fat content.

I’ve mentioned quite a few times how great watercress is for you: it’s the most nutrient-dense plant food you can get. Yes, it beats kale and spinach.

Unlike spinach however, watercress (and kale for that matter) don’t rate highly on a palatability scale. Well, not mine anyway. But I will give watercress the time of day because of its nutrient status.

So finding things to do with it is pretty difficult. It’s quite peppery so you usually wouldn’t want to use much.

A little in salads, sometimes soups, but I usually always revert to smoothies. They’re easy, and I can tolerate a larger ‘dose’ …Sorry, I’m really making it sound like medicine, huh? But according to Hippocrates it is, so give me this over a pill anyday…

Today however, I went overboard. I’ll blame the seller at the farmer’s market: the bunch of watercress I got for just $2.50 was so huge I wasn’t able to fit it in my fridge. I typically resolve this kind of issue by using some immediately. Hello, breakfast! 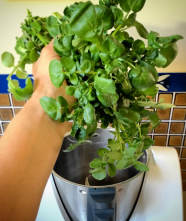 The problem was I had to chop one helluva lot off it to fit it in the placcy bag, in the fridge …see the pic: that’s the ‘handful’ in relation to my not-too-small (2 litre) Thermomix. If you are going to give this smoothie a go, I’d suggest you halve what I used. Unless you’re Hardcore. Like me. (Pffft!)

Simply blend a handful of watercress with the flesh of one mango, 200-300gm fresh pineapple (more or less, to taste: this is fruit that best ‘tempers’ the watercress) and 200mls of cold or coconut water. (Thermies, I blended it on speed 9 for 1 minute). Fresh mint may help to somewhat disguise the fiery watercress and will complement the tropical fruits as well. 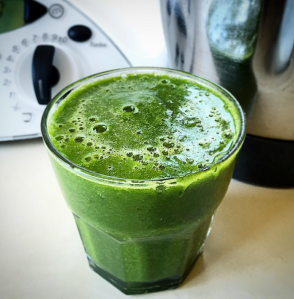 Check out the rich green of my ‘hardcore’ (OD) watercress smoothie. Pretty colour but talk about a fire in my (throat and) belly!

Glancing at my herb pots as I walked in from yoga this afternoon, I noticed how well my watercress was doing. So well that it looked like it might be beginning to suffocate my curly parsley. That’s not ideal. My mint has bounced back again too (it is temperamental sometimes) and I was suddenly struck by wonder: do watercress and mint go well together? Surely they do?

The apple & melon lassi from one of my recipe books

Watercress, as I have mentioned before (in a previous post, see here) has been recently crowned the most nutrent-dense plant food, so I am pretty keen on getting it into mah belly as much as possible …and away from my poor parsley plant. Mint is a renowned ant-acid. And both herbs have a fiery ‘freshness’ about them.

Since I wasn’t overly hungry, I decided a drink was all I needed right now and my train of thought led me from the usual option – a smoothie – to the memory of a particular recipe I knew I had somewhere in one of my books. ‘Apple’ and ‘mint’ were swimming around my head while I checked recipe book indexes. Then I found it. A Lassi.

So I set about re-creating the apple & melon lassi recipe with my own, preferred ingredients and was totally chuffed with the result.

For one large serving, you’ll need 1 peeled, cored, chopped apple (you could keep the skin on if organic, as long as your blender is high-powered enough to break it down) 1 banana (mine was frozen) a handful of mint leaves, a handful of watercress leaves, approx 60gm of coconut cream and 200gm coconut water. (NB: fluid measures in grams because I use a Thermomix.) 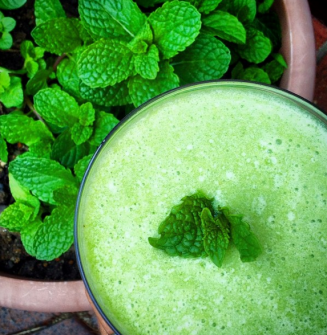 Simply throw everything in and blend until smooth. (Thermies: 1½ minutes at Speed 9) It is so refreshing!

Besides your run-of-the-mill mint variety, I also have some chocolate mint growing in the same pot so included that in my ‘handful’. You could vary the concentrations of coconut cream & water to alter thickness, but I think the more cream you use, the less intense the apple & herbs flavours may be. I have considered how a nip of vodka or apple schnapps might alter the creation, but I know the truth is, it would most likely negate all the nutritional benefits of the greens…!

Out with the kale, and in with the watercress! I have to admit I am a bit of a trendite when it comes to nutrition, but my motives are pure; I simply try to consume the most nutrient-dense foods I can. And I don’t think it’s such a bad habit, training myself to include as many “super foods” in my diet as possible.

It was this chart on David Gillespie’s “Sweet Poison” Facebook page that changed my mind: 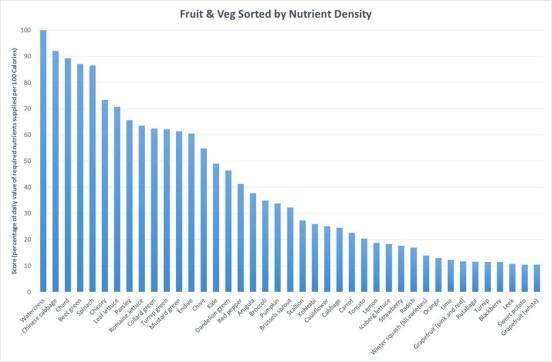 (David Gillespie sourced this from the following website: Centers for Disease Control & Prevention)

Don’t get me wrong, I’ll still eat kale. But I’m quite happy that my preferred leafy green – spinach – ranks higher in value!

But the fanatic I am, well, I HAVE to include it if it tops the list! So at the very next farmers market, I sought out a bunch of watercress… without considering exactly what I’d do with it. I’m not really into plain old sandwiches per se, and I’ve really only thrown it into green smoothies in the past. So I Googled. But the results were quite uninspiring.

It was while I was entertaining a couple of my closest girlfriends on the following weekend that the idea came to me: Dip! Surely if spinach and basil make decent ‘dip heroes’, why not watercress? As far as I could see, it was the best way to use a tonne of the stuff quickly. And since it’s quite fibrous, pulverising it in a powerful blender or Thermomix is ideal (as in green smoothies) because you can use more of the plant (stems etc). MORE fibre, less waste. 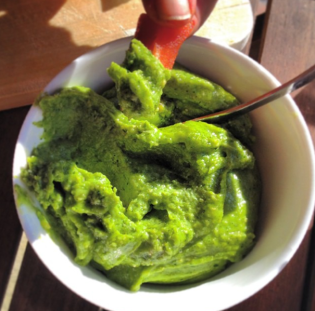 So I created a dip from the first spinach & cashew recipe I came across in a Google search. Watercress has a bitterness to it but also seems to leave your palate refreshed and I found that the cashews complimented it perfectly: countering the bitterness with their natural sweetness, without destroying the herb’s ‘freshness’.

It’s also dead easy: simply blend ⅓ cup cashews, 1 firmly packed cup of watercress (or a big handful!), ¼ cup olive oil, a decent dash of Himalayan salt & 1-2 tablespoons of lemon juice (to taste) until smooth. This may require a few pauses to scrape down the sides of the blender (or bowl if you use a Thermomix).

It also makes a great sandwich spread, and I even made a salad dressing of it by mixing in a little extra lemon juice & oil. What better way to pump up the nutritional value of other meals?