I just gorged on cheese. I felt like some cheese on toast for lunch but thanks to my relationship with ‘instant gratification’ I started hoeing into the Nimbin Natural before my GF bread was toasted. Then I had a couple more pieces while the griller took its turn. So by the time I’d eaten, I was full as a goog (Aussie slang for “I’ve had sufficient”).

Now, with the stomach juices working hard (& loud!) I’m feeling a tad guilty about the lack of fibre & nutritional variety in that ‘meal’. Since there’s no way I could fit a whole salad in after all that (a sign in itself…) I’m going to ‘supplement’ with a smoothie.
Good old smoothies!
How did we ever live without them before? Nutrient-dense meals-on-the-run.
They are SO easy. So ridiculously easy. And they’re a blank canvas for the Creative. The one basic ‘rule’ I can ever recall hearing somewhere is:
60% FRUITS + 40% VEGGIES/GREENS 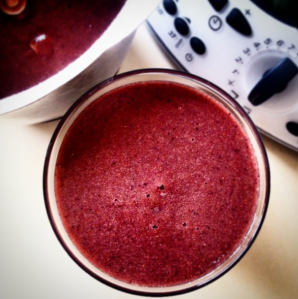 Of course, when you get used to them (that is, when you “harden up”!) you may find you can reduce the fruit component, which is a good thing for those who want to ‘control’ their fructose intake. Intensely flavoured components of a smoothie can disguise less palatable ingredients. If you have some idea of what fruits & vegetables go well together, you’re unlikely to go too far wrong. If all else fails… Google. There are literally thousands of recipes out there in the ether.

For this one I grabbed an orange, lots of strawberries & blueberries, a banana and a couple of dates and blended them with a chunk of cucumber, a stick of celery (leaves’n’all) a handful of baby spinach and some cabbage.
I blended the solids first to break them up as much as possible, then added my liquid (coconut water in this instance) for a smoother drink. 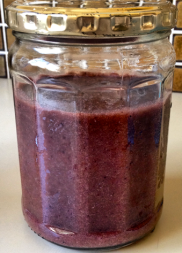 So full… More for later!

The thing to remember with smoothies (and here I hark back to the ‘sign’ I mentioned during my cheese story) is that by liquefying your food, it’s easier to consume more than you need, plus there’s less work for your digestive system to undertake. While that can seem like a good thing  – and it can be when you are unwell and need all the energy (& nutrients) you can get for minimal effort, while your immune system is hard at work – healthy peops are likely to become hungrier sooner (despite ingesting a salad bowl’s worth of calories). Because your digestive organs aren’t really getting the ‘workout’ for which they were designed. They need the challenge of some tough fibre or dense proteins to breakdown in the same way your body responds to the fitness challenges you (should) apply to it in training!

To this end, I don’t believe smoothies should be consumed on a regular (daily) basis. After all, human evolution didn’t involve electric blenders!

For a meal on a run, yes – if you really CAN’T make the time. For instant gratification, yes, if you really CAN’T exercise self control. And heck, even for the occasional ‘nutrient supplementation’ after a very average meal (to wit: me, today) and at the expense of excessive energy intake!