Ice cream is one of my weaknesses. But today I made some here at home, from scratch, and in less than 5 minutes …with two ingredients. Yes, just two, real, whole-food ingredients. No added sugar whatsoever.

All you have to have prepared for instant ice cream is some frozen fruit. I’ve always got fruit in the freezer; blueberries and bananas are staples but over summer I added mango flesh & lychee pulp to my stores and it was the lychee pulp I used to make my ice cream today. It’s sweet but hasn’t an overpowering flavour so it makes for the perfect ice cream to pair with other foods if you wish.

Now, I have to admit, I’ve done this plenty of times before, but with full-fat natural yoghurt. The plethora of gut friendly bacteria in yoghurt does make it a much healthier option but today I just didn’t want that tang. I love frozen yoghurt but I love ice cream more!

In typical fashion, I just threw every thing together in my Magic Bullet without measuring so I’m really guessing with quantities here… but I reckon I used about 1/3 cup of frozen lychee pulp & about 2 (hefty) tablespoons of Maleny Dairies pure cream. Maleny Dairies’ cream is the thickest natural cream I have ever come across so I’m going to add a disclaimer here and say that if you use ordinary, mass-produced pouring cream this recipe won’t work. If you buy your cream from the supermarket, I’m guessing you’ll be better off with ‘double’ or ‘thickened’ cream for this recipe. Similarly, if you’re thinking of trying this with coconut cream (vegans) it will have to be a really thick variety like Ayam brand …not the cheaper supermarket ones.

Simply throw them into your blender together, blend and scrape a couple of times and Bob’s your uncle! I served mine up in a dish with halved strawberries (see pic). You could pop it back in the freezer for awhile if you prefer it more solid… most home made ice cream is put through a number of alternating blend-and-freezes before serving. I just couldn’t wait that long! 😉

I’ve noticed that Fruit Water is starting to trend a little more now… and I mean fruit water beyond just lemon or lime or mint floating around in your glass: large jugs or urns with anything from cucumber to peach or mango flesh lolling around the bottom. This is meant to impart a tinge of flavour to make water consumption more tolerable to those who just don’t like drinking it.

I have no problem drinking water at all, but lately I’ve begun saving the water used when I’ve steamed veggies (knowing that some of the nutrients lost from the vegetables in the cooking process end up in the water) …and it’s not really enjoyable to drink straight. The I Quit Sugar gang suggest saving and using it in your smoothies. That’s a fantastic idea, but… I don’t consume smoothies often enough to use up all the water within a few days. So I needed to conceptualise some way to use larger quantities of the water in a single serve.

It wasn’t a complex idea, combining the ‘whole-fruit-in-water’ concept with the ‘nutrient-dense-steamed-water-for-smoothies’ notion, but I didn’t know if it would work. I mean, would it actually taste nice? There was obviously only one way to find out…

My first attempt involved fresh blueberries. And it shocked the pants off me. (Not literally.) It was delicious. Unfortunately I didn’t note the quantities, but I do recall using a decent handful of blueberries and perhaps 1-1½ cups of cold (veggie) water. And it really was this simple:

Naturally this may only work with certain kinds of fruit …especially when you are already using steamed vegetable flavoured water… fruits that are naturally sweet and easily blended. For example, oranges may be too tart and fibrous – unless you can be bothered to remove the membrane and seeds from each segment…

Lychees are a naturally sweet and juicy fruit and I happened to have a bunch of them in the fridge. But because they’re also subtle in flavour, I thought I’d better add something else, to ensure I’d disguise the water’s taste. Since lime (like lemon) is well known to help intensify flavours (of other foods, besides themselves!) and I happened to have half a lime in the fridge, I opted for that and, in case that wasn’t enough, I added mint as well: another strong flavour and perfect compliment to both lychees and lime (…and very Asian…) 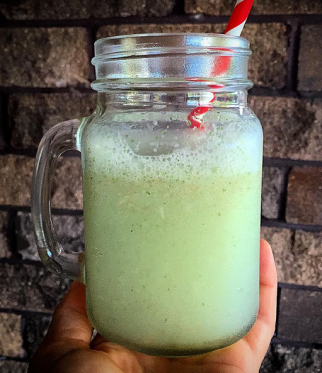 Blend simply for as long as you wish, and serve immediately.

It’s a light, very refreshing bevvy, perfect for hot days like those we’ve been experiencing lately on the Gold Coast (…gotta love summer!) but just remember that unlike pure water, this beverage contains calories, so despite it being a far better option than juice, cordial or soft drink, it wouldn’t be such a great idea to chug down gallons of it on a daily basis either. Treat it as… a treat! Enjoy …and let me know what other fruit works if you feel adventurous!